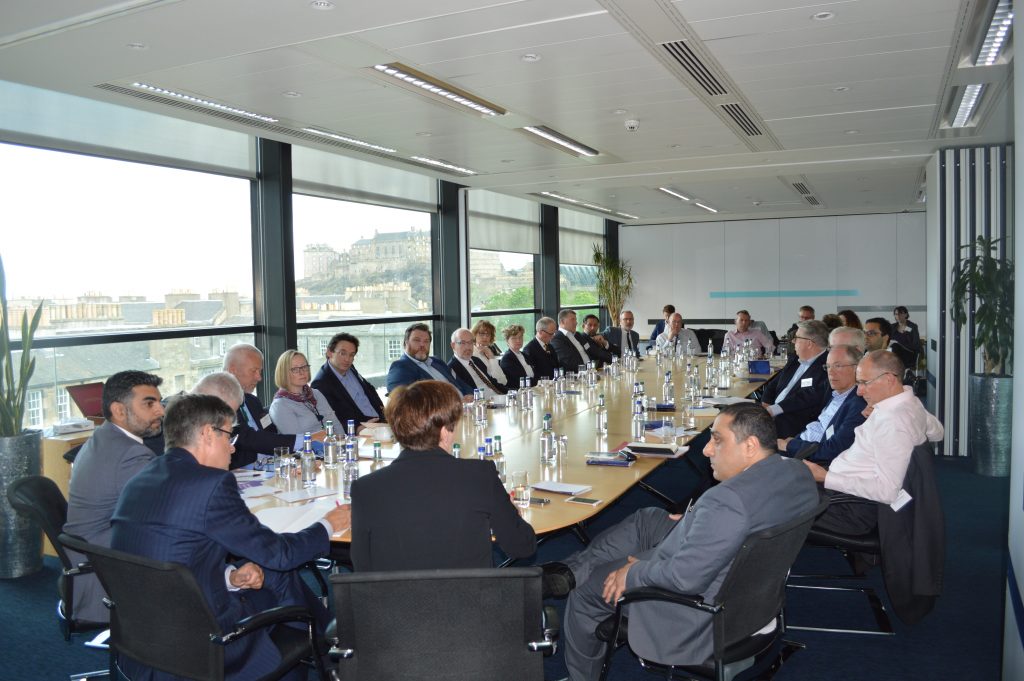 03 JulEFH Participates in Faith and Finance Round Table in Edinburgh

Board Directors of the Ethical Finance Hub attended the 13th Edinburgh Ethical Finance Round Table took place in the offices of Maclay Murray & Spens LLP at Quartermile on 15th June 2017.  The topic for the meeting was faith-based finance and the faith perspective on ethical investment.

The first presentation was given by Catherine Alexander, chair of the trustees of the Church of Scotland Investors Trust.  The Trust was established by the Church in the 1980’s to provide it and its congregations with cost effective investment management of their funds.  The total funds under management currently amount to around £400m and day to day management is delegated to three investment management firms.  Catherine indicated that the Trust has always operated on the basis of avoiding certain categories of investment, their current policy being to exclude any company with a higher than 15% involvement in armaments, alcohol, gambling, tobacco or tar sands.  Certain of these exclusions were not without their questions – for example the Church of Scotland itself is willing to accept heritage lottery funding for projects.  Increasingly the Trust is seeking ways of encouraging ethical behaviour by those they invest in and consider that they have an important role as lobbyists in this direction within the corporate sector. Saquib Ismail, Senior Sales Manager with Al Rayan Bank gave the second presentation.  He opened by giving a brief history of the Bank, which was founded in 2004 (as Islamic Bank of Britain) and opened its first branch in Scotland last year (see Scotsman article).  It currently has around 50,000 customers and has grown rapidly in recent years.  In keeping with Sharia requirements all of its products are asset-based and all returns provided to depositors constitute profit and not interest, although for the most part this distinction is invisible to the Bank’s customers. Interestingly, the list of assets and activities which the Bank excluded is very similar to that mentioned by Catherine, although in the Bank’s case the exclusions are absolute rather than matters of choice and policy.  A recent notable development is that around 80% of the Bank’s deposit customers are now non-Muslims, although Muslims naturally remain a substantial majority of those taking “Islamic mortgages”.

The presenters then took a number of questions from the floor, one point which emerged being that any set of ethical investments principles needs to be kept under regular review, to take account of changing perceptions and understanding.  There was general agreement that most recent research had tended to indicate that returns from ethical investments generally fully matched those of conventional investment strategies.  David Cousland, of Fair Finance Agency, cited the work of Oikocredit in the developing world, including one notable project which had been running across the Muslim and Christian communities in Egypt for around 40 years. The final part of the meeting saw a report on a “global first” for Scotland, namely the ongoing project between the Church of Scotland and the Islamic Finance Council UK to attempt to produce a financial product which would help to tackle financial exclusion, based on the shared values of the two faith communities (see BBC article).  Doctor Richard Frazer and Martin Johnstone, Convener and Secretary of the Church and Society Council, spoke for the Church of Scotland and Omar Shaikh for the UKIFC.   The aim will be to produce in the fairly near future a document setting out the conclusions reached on the applicable shared values, as emerging from the series of inter-faith workshops which had taken place, and there would then be a phase of “R & D” seeking to build out the detail of a financial product.  It was emphasised that the ultimate product would be open to the whole of society, not only those of the faiths involved.  The relevance of Scotland’s long history of ethical finance was noted and Doctor Frazer also made the point that part of the process would involve taking views from the “grass roots” communities which the product would be intended to assist.  In response to a question from the floor Mr Shaikh confirmed that it was the intention of involving other faith groups also in the process as matters moved forward.